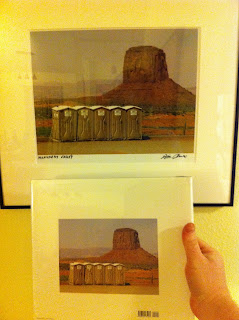 My copy came today. The first thing I notice is the back cover is the Bill Owens image of Monument Valley (the image that Bill gave to me as a gift) hanging in our living room. I see this image every day and chuckle at Bill's irony. I'm just glad to have met Bill Owens a few years through a mutual friend. I wish he would swing back through Florida on one of his sojourns.

Katherine Ware draws two distinct lines of images in this catalog: the first are images that function (or functioned) as means of advocacy, starting with the idealized images of Ansel Adams and Eliot Porter, then discussing Robert Glenn Ketchum's trip to Alaska and subsequent advocation to Congress which led to the Tongass Reform Bill under Reagan.

The second section deals with work that she describes as "Despite their social content, these pieces were made by people who consider themselves artists. their work is presented, almost without exception, in galleries, museums, and art-world magazines, rather than being seen in the context of propaganda or advocacy." Clearly this section is the New Topographics influence of the exhibition and catalog.

This is where I have the biggest internal conflict. I am a huge fan of Adams, not because of his images, but because of his advocacy. Yet I'm clearly in the New Topographics era. I often feel a wall exists between contemporary landscape imagery and the legacy of advocacy that earlier images carried. At SPE in Dallas a few years ago I saw some horrible horrible things in the landscape but little resolution. At times a lyric from Sleater-Kinney's One Beat haunts my thoughts: "Is real change an illusion?"

I suppose in a lot of ways I'm carrying some sort of legacy from Adams and, say, Klett. It's probably subconscious at this point. I'm still reading through the text so I expect some more moments of clarity.

One of my favorite Johnny Cash moments is a clip of a performance of The Ballad of Ira Hayes on a reservation, followed by As Long as the Grass Will Grow paired with the reality of reservation.

Cash's work is related to my process of photography. He wasn't afraid to document, and neither should I.

Earth Now: American Photographers and the Environment
Posted by Unknown at 11:52 PM