Sometimes all you get is a gate and earthen ramparts facing the road. I'm going to have to figure out how to get into this area, but there's no identifying marks as to who the develop is or anything, just a really nice gate and some landscaping.

oh, and a big ass crane way off in the distance. Surely someone is missing a crane.

Posted by Unknown at 8:00 AM No comments:

"Standing afar off for the fear of her torment, saying, Alas, alas that great city Babylon, that mighty city! For in one hour is thy judgment come." - Revelation 18:10

I first read (or rather listened to it, narrated by Will Patton) Alas, Babylon earlier this year. It was released in the late 50s at the height of the Cold War, when nuclear annihilation was a heartbeat away. The title refers to the phrase "Alas, Babylon" that the characters use as a way to signal, in code, that the end is imminent.

What's salient for me about this book is the setting, a small town in central Florida. I drifted around countless towns similar to the town in the book before the holocaust, and the memory of the book drifted back into my head, not because of war, but because of the destruction of the natural landscape of Florida.

I feel that it's bad luck to name a show or body of work before it's fully formed, but Alas, Babylon somehow fits.
Posted by Unknown at 9:46 PM No comments:

From the St. Pete Times.
Posted by Unknown at 4:36 PM No comments:

sometimes all you need are a few pictures to tell the story of a place. 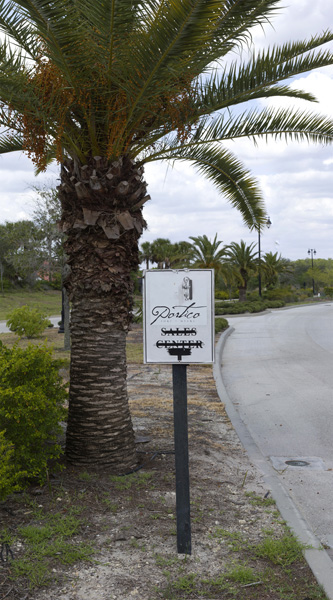 View Larger Map
Posted by Unknown at 10:10 AM No comments:

To call Lehigh Acres the ground zero of the housing crisis in Florida is a bit of misnomer to me; I prefer to think of it as patient zero. Following a long and sordid history, Lehigh Acres has over 11,000 miles of roads, lots for 152,000 homes, and only a 10% occupancy rate on all those lots. It's long history of failure dwarfs the land usage failure around me in the Tampa area.

I had a ill feeling driving around Lehigh Acres; many of the roads are still dirt roads, and it was quite quiet, even with all those roads.

I didn't make many images while there; I was very unsure about the place. I did pass a idyllic looking pine forest next to the road, with houses barely visible. I walked through the area, the ground covered with several inches of pine needles. It's a scene I see very rarely; I still can't adequately describe the ground of the wooded area covered in the sea of pine needles. It's quite a beautiful site to me; and I had to image it because it awed me so.

There's also several canals cutting through the area. I'm sure if Lehigh Acres was built to anything near capacity, the canals would be needed to control water runoff and keep houses from flooding. But with the capacity at 10%, they just become another unnatural feature to this place.

Lehigh Acres represents everything that is wrong with Florida; the overbuilding, the greed, the failure to grow responsibly. Maybe that's what made me uneasy; seeing the heart (and start) of the blight. It's like being in the heart of the fire, when all this time I've been dancing around the edges.

I've got to go back; there's too many images not captured, and more area to explore. 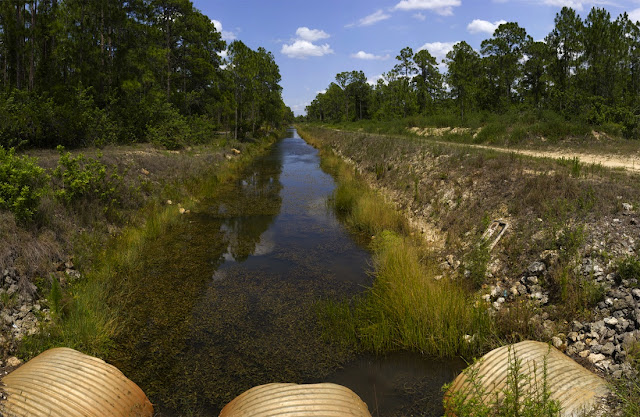 Posted by Unknown at 9:42 AM No comments:

I'm just going to leave this here to deal with later...

notice the date on the master plan: 2002. Other than the mall, none of this has been built, defeated by environmental impact and the poor economy.

Boom or bust, however, we're getting our Wal-Mart, by god.

..."creating the second largest intersection in the United States! Did you know that the only larger intersection is in Las Vegas and is highlighted by a road known as the Sunset Strip!"
Posted by Unknown at 11:29 PM No comments: